Applications
"An application is a software program that is is designed for an end user or another system; and are typically hosted in the cloud. Examples of applications include Facebook.com which is a web application intended for end users to interact with. When you log in to Facebook, you are also interfacing with another type of application that is invisible to the end user, but running in the background. This login system is also a type of application, but instead of an end user, it is an application that talks to other Facebook applications in the cloud to facilitate how a user logs in. Applications are usually developed in a programming language, like JavaScript, Python, C# or Java to name a few. Other types of applications include mobile applications, also known as “apps” (ie. the Uber app) and even TV apps like Netflix and Hulu that you control directly with your remote on a smart TV. The major cloud providers today offer you infrastructure to be able to run your applications in the cloud. This is a major source of revenue for them."
in other words
The things we use to browse the internet, send email, invoice customers, listen to music. Basically everything.
Shareable Image 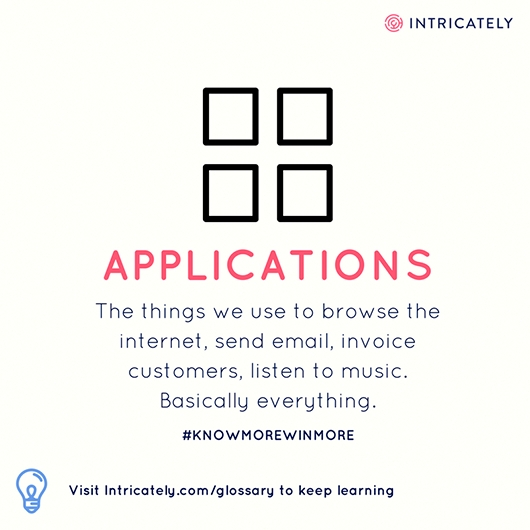